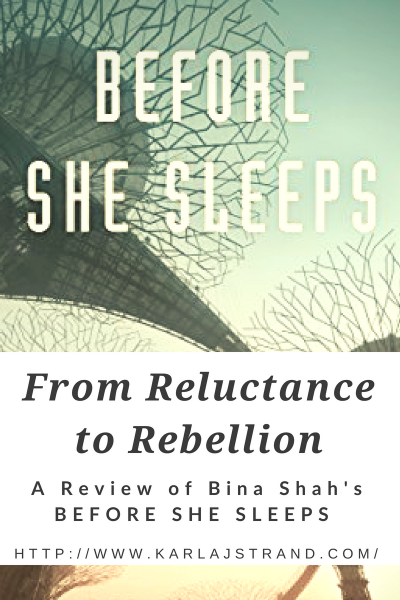 Green City in South West Asia is lush, modern, and hi-tech – a model of beauty and prosperity. The air is clean. Women are provided for and protected. There are good citizenship classes and robotic doormen.

Green City also has DNA security scanners. It has assigned marriages and women must take multiple husbands. As “the mothers of the new nation,” they are responsible for repopulating society and kept constantly pregnant. And if they break the rules as laid out in the “Handbook for Female Citizens,” there are harsh punishments – including “elimination.”

This is the world described in Bina Shah’s intriguing new dystopian novel, Before She Sleeps.

What first attracted me to this novel was its cover. It is alien-futuristic and I envisioned AI robots and flying cars everywhere. But it also gave me a sense of being someone down low to the ground, looking up at the new world from the depths.

I wondered if the underground was somehow going to play a part in the story – and indeed it does.

Because also in this world, there lives a group of women who refuse to capitulate to the new rules of forced marriage and childbearing. These women live underground only venturing out at night to provide a secret service to men – and it’s not the one you think.

These women don’t provide men with sex, but with intimacy. These women touch men, listen to men, hold men as they fall asleep; they give men the individual closeness they are desperately craving in this world. And although this allows the women to avoid the life of a wife, there is still a steep price to pay.

Throughout the book I wondered: is that price worth it?

What does freedom mean to me? What would I be willing to give up for it?

And were any of the women in Green City or its underground truly free?

“I don’t like the idea of being the sandpaper to smooth a man’s rough edges, but it’s better than being an entire nation’s incubator.”

Before She Sleeps has been compared to The Handmaid’s Tale, and rightfully so. The premises regarding women are very similar, wherein men hold all the power, despite the necessity of the women in sustaining life.

“Girls and women in Green City were required to have public profiles that men could peruse before applying for a Wife.”

What sets this novel apart from others in this genre is its grounding in South Asian and Muslim cultures and its commentary on some of the patriarchal traditions of those cultures.

Shah refers to these identities in a variety of ways throughout the book and makes statements on customs that oppress many Pakistani and Muslim women today, such as veiling practices and gender selection. These markers add tremendous value and yet are subtle enough to not affect the universality of the story.

While its getting increasingly difficult to shine amongst the growing field of feminist dystopian novels, Shah offers a valuable example of what will keep this genre fresh: stories that offer readers a relevant themes of resistance to patriarchal futures based on varying cultures, religions, identities, and other perspectives.

While the feminist in me appreciated the anti-patriarchal messaging of the book, I have to admit that the lesbian in me was like: “Wait. Where are all my queers?!”

Even though the “Gender Emergency” is mentioned repeatedly throughout the book, I felt it needed more development. There is no mention of people who are gender nonconforming, nonbinary, trans, queer, gay or otherwise. Where did they all go? Even the handbook only refers to “females.” The two or three times that the possibility of a man’s sexual relationship with another man is mentioned, it is framed by violence and shame – definitely not the portrayals we need reproduced.

I wanted to hear more about the Gender Emergency, the HPV that mutated and caused the decline of women, and the “Perpetuation scheme,” which was supposed to address the disparity. I also wondered what was happening in the rest of the world, outside of South West Asia. Some history was explained – there were references to the “Final War,” the three waves, nuclear winter – but if more developed, these details would’ve made a strong book even better.

Overall Shah’s writing is solid and she is adept at switching between voices of her characters. While this style may seem disjointed to some readers, I felt that it added to the overall feelings of volatility and imbalance of the world Shah built.

Despite some shortcomings, this is a satisfying and engaging novel that offers a nuanced take on the growing feminist dystopian genre. I look forward to reading more by Bina Shah.

This is a quick read that I would recommend to anyone who has an interest in speculative or dystopian writing, fans of The Handmaid’s Tale, and those with an interest in feminist literature, international writers, and/or women writers of color.

Find Bina Shah online at http://www.binashah.net/ and on Twitter @BinaShah.

This post contains affiliate links. All reviews are honest and my own. Thanks to Bina Shah, Delphinium, and NetGalley for a complimentary ARC!

21 thoughts on “From Reluctance to Rebellion: A Review of Bina Shah’s BEFORE SHE SLEEPS”