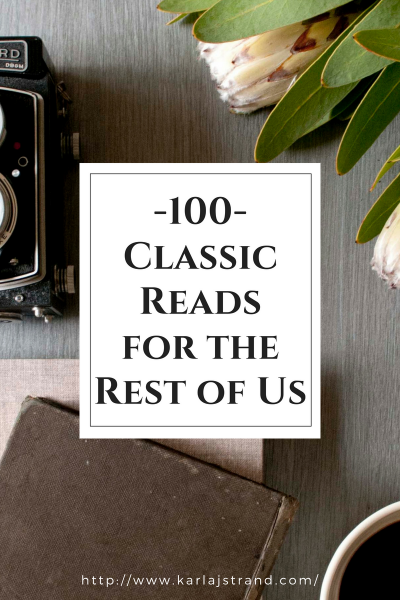 I enjoy classic books. There’s something about books that have stood the test of time that intrigues me.

But let’s face it, historically books by white men are the ones most often considered as “classics.” Some books by white women have been included and the canon is expanding to include writers of color and writers outside of Europe and the US but often, one has to do some research to uncover these titles even though there are a wealth of them.

And if you’ve visited my website before, you know that my focus is on reading “for the rest of us,” or books by womxn and others of historically marginalized populations.

So when I recently decided to join The Classics Club, I knew I wanted to focus on classics by womxn, including Black women, women of color, queer women, and women outside of the US and Europe.

The Classics Club was created in 2012 to inspire people to read and write about classic books. The idea is to pick a list of 50 or more classic books that you commit to reading and sharing on your site over the next five years. After reading the guidelines and how to join, I decided it would be something I would like to take on but with my own twist (of course).

One thing I appreciate about The Classics Club is that you can define “classic” how you like. I gave my list a lot (like, A LOT) of thought and narrowed down the most important factors in its creation:

You’ll note the exclusion of some books that you might think would be obvious choices given the criteria above (Zami, Jane Eyre, The Color Purple, Bluest Eye, etc.). Sometimes this is because I have read them before and am not looking to re-read them; other times, this is because I just don’t want to read them or just didn’t want to include them on this list. Bottom line: I included what I wanted!

My list is below. I’ve included the original publication/writing dates and plan to read them in chronological order. It’s possible the list may change or grow over time. I will be adding Amazon links and more tags, and I will regularly update the list as I make my way through and will link titles to the posts I write about them.

UPDATE: I’ve removed Vindication of the Rights of Woman and replaced it with Still Brave (#99).

Thanks to The Classics Club for the inspiration to undertake this challenge! Care to join me? Let me know or create your own Classics Club list!

Let me know what you think of my list! What books did I not include that you think I should have? What titles don’t deserve a spot on the list?

42 thoughts on “Classic Reads for the Rest of Us”