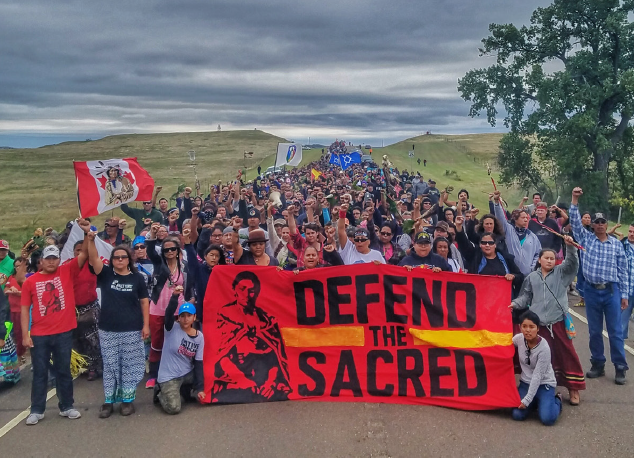 Every day that Line 3 is operational, it carries twice as much oil as the previous line and has a climate impact equivalent to 50 coal-fired power plants.

On Friday, October 1, Pipeline 3 became operational through Minnesota. Resistance efforts, largely led by Indigenous women and two-spirit individuals, have been fighting this tar sands pipeline for the last seven years. And many are looking to hold President Joe Biden accountable for promises made and broken.

“It’s with a heavy heart we receive the news that the U.S. has tragically failed once again to honor our treaties and protect the water that sustains all life on Mother Earth,” read a September 29 statement from the Indigenous Environmental Network. “The Line 3 fight is far from over; it has just shifted gears. Do not think we are going quietly into the night; we will continue to stand on the frontlines until every last tar sands pipeline is shut down and Indigenous communities are no longer targeted but our right to consent or denial is respected. … Respect us, or expect us.”

Those fighting to stop the construction of Line 3 and other pipelines point to a variety of risks. There are the dangerous environmental and health impacts, complete disregard of Indigenous sovereignty and in the case of Line 3, treaty infractions. Manoomin, or wild rice, is also being threatened. To the local Anishinaabe, manoomin is more than a food staple but a plant species with rights that must be protected. The construction of the pipeline endangers local women and girls and infringes upon the rights of the rice, the land, the water, the nonhuman beings and the people.

Through the use of non-violent direct action, water protectors have been able to disrupt pipeline construction efforts. Some have been able to shut down terminals, testing facilities and pump stations along the pipeline. They have influenced some banks and insurance companies to stop backing oil infrastructure projects. They have staged protests at the home of Minnesota Governor Tim Walz and interrupted events of state politicians to call out their inaction in stopping Line 3. Taysha Martineau, a two-spirit Anishinaabe leader and founder of Camp Migizi, declined an award from NYC Climate Week because the event is sponsored by Wells Fargo and Bank of America—two of the largest funders of pipeline projects.

Enbridge, the company behind Line 3, has been less than transparent about construction practices, timelines, budgets and possible harm that could come to the land, water and living beings in the path of the pipeline. There was no federal environmental impact statement (EIS) done by the Trump administration. And according to Honor the Earth director Winona LaDuke (White Earth Ojibwe), “The pipeline EIS that was done by the state was inadequate, and didn’t look at climate change, didn’t look at treaty rights, didn’t look at a spill assessment of Lake Superior, didn’t look at a ‘no build option’—all requirements under federal EIS.”

Enbridge has been accused of violating the Clean Water Act and not abiding by permits. In September, Enbridge was fined $3.32 million by the Minnesota DNR for piercing an aquifer and not reporting it to the DNR. By breaking environmental laws, Enbridge threatened the health and safety of nearby wetlands as 24 million gallons of groundwater flowed out of the aquifer. There have been 28 frac-outs, according to Honor the Earth—when drilling fluid or mud containing chemicals are “accidentally” leaked into the surrounding water and soil.

Read the rest of the article at Ms. Magazine…