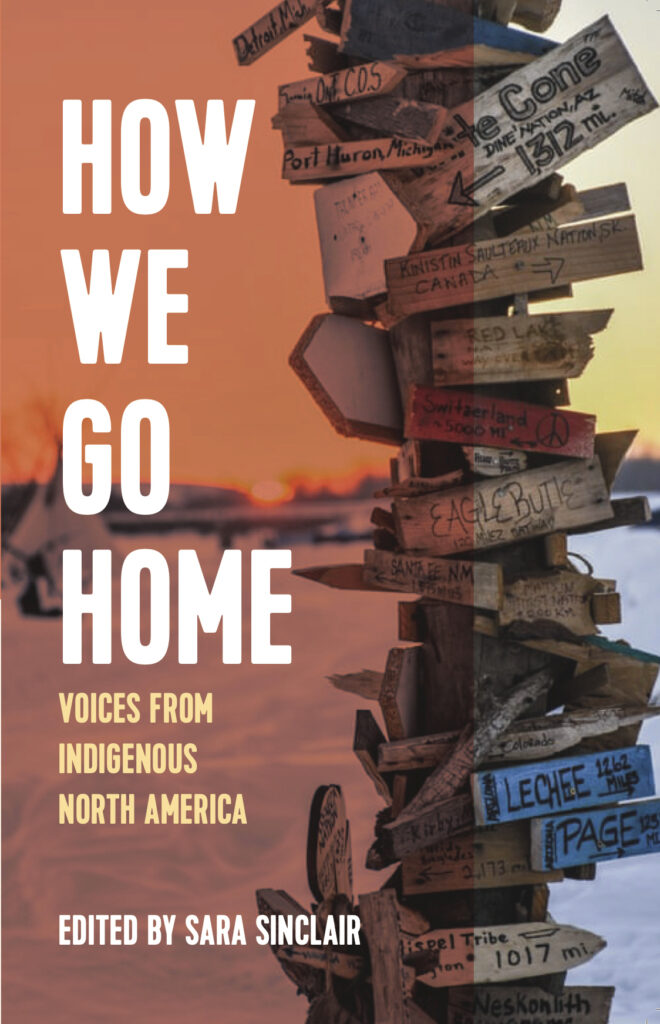 What is it like to be a citizen of one nation subsumed within a larger nation whose fundamental economic, social, political and cultural goals are so often at odds? Edited by oral historian Sara Sinclair, How We Go Home: Voices From Indigenous North America aims to answer this question.

Anyway, if there’s one book you read this month, make it How We Go Home: Voices From Indigenous North America which is out now by Voice of Witness and Haymarket Books. Edited by oral historian Sara Sinclair (Cree-Ojibwe), How We Go Home is a collection of twelve oral histories by Indigenous people from across Canada and the United States. Accessible and necessary, this volume shines a light on a wide variety of challenges and successes these Indigenous narrators have experienced throughout their lives.

Karla J. Strand had an opportunity to speak with Sara Sinclair about the book, its impact and the power of collective memory.

Karla J. Strand: First of all, Sara, I loved the book. It’s very moving, very candid. Can you say a bit about the book and how the idea for it came about?

Sara Sinclair: It really did feel like this series of serendipitous moments. I discovered this phrase “oral history” in the back of a Dave Eggers novel, [which described] this oral history series that Eggers founded, Voice of Witness.

I started madly Googling about oral history and understanding how it exists in so many different contexts but also how it’s becoming an academic practice. I then realized that I knew what oral history was because on both sides of my family it’s a really important part of culture: I have two grandparents who have participated in more formal oral history projects.

My father’s father was interviewed for the Truth and Reconciliation Commission (TRC) in Canada, which was essentially a huge oral history project that looked into the legacy of the Indian residential schools in Canada. And then my mother’s mother was a German Jewish refugee who was later in her life interviewed by the Shoah Foundation. So again, another huge oral history project, but I wasn’t familiar with [the term oral history]. Somehow it just resonated with me in a way that was ultimately life-changing.

I found the oral history master’s program at Columbia and I arrived with an interest in using it to amplify contemporary Indigenous narratives. That was the area that I felt the most interest in and also the area that I felt the most pressing need. I just was so conscious of the fact that my own experience growing up even in pretty progressive public schools in Toronto, the Native American story was so absent and so I was just really excited about the opportunity to work towards filling a pretty significant gap.

While I was at [Columbia], I did a thesis project [with] a very specific narrative arc: It was interviewing Native Americans specifically—I didn’t interview Canadians at that point—from reservation communities who left their Nations to attend elite academic institutions and then returned home again to work for their Nation.

Ashley Hemmers (Fort Mojave Indian Tribe) was the first person that I traveled to interview for my thesis. I really am not sure that, had that not been the first trip and the first interview, that this path would have unfolded in the way that it did—because the experience that I had with her just really showed me the richness of what this could become. The experience that I had, the way that she acted as a guide to me on her Nation, the hospitality that she showed me and also just the intimacy and the intensity of what she shared with me, I was overwhelmed in the best possible way. I remember feeling like she’s given me this enormous gift and also this enormous responsibility.

It was really those first few interviews that showed me what this project could be because Ashley and Wizipan Little Elk (Rosebud Lakota) were such incredible narrators and educators. I felt if I kept going with this, if I kept traveling the continent and hearing different people’s stories, histories and ways of existing in relation to this land, what a collection this could be! And so that was what I proposed to Voice of Witness and they were very interested.

They wanted to expand the central question to include a greater range of life experiences, so we [came] up with a new central question: What is it like to be a citizen of one nation subsumed within a larger nation whose fundamental economic, social, political and cultural goals are so often at odds?

And that felt like a good question because it allowed me to start conversations with really almost anyone but it had enough of a focus to keep it in line with Voice of Witness’s focus on injustice. So that was the origin story of the project.

Strand: The narratives in the book are so wide-ranging but then still come back to this collective experience of something being taken away or missing or leaving and then returning, which is so powerful. And the method of oral history really overlaps with the oral traditions of many Indigenous cultures and communities.

Sinclair: Oral historians are really interested in memory, of course, and if you think about stories and memory in an Indigenous context, then you’re thinking about the collective memory.

How We Go Home shows how colonialism has interrupted the collective memory, and we see the outcome of that in many different ways in the book. We see the legacy and the intergenerational impact of the different kinds of trauma that have been enacted by both the United States and the Canadian governments. We see how loss of language and culture has affected people’s sense of themselves. We see the higher rates of poverty, addiction and incarceration.

But then also, and what was so important to me from the outset, is we see that return. There isn’t a narrator in this book who’s not in some way working towards restoring that collective memory, that culture, that knowledge, that “village we once had” as Althea Guiboche (Métis, Ojibwe, Saulteaux) calls it [in her narrative in the book].

So I believe that the book is honoring the collective memory, showing how it has been attacked and dismantled and then showing the work that’s being done to restore it.