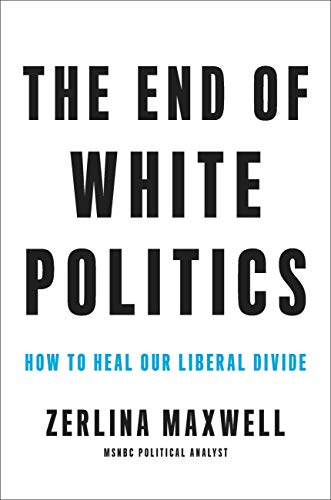 As soon as political analyst and MSNBC contributor Zerlina Maxwell and I start our conversation, I hear a lovely bird singing loudly from where she sits at her family’s home in Virginia. She’s been sheltering there since early March when her father, a microbiologist, told her to leave her home as COVID-19 was beginning to shut down entire cities.

Remotely, she’s still able to co-host her daily radio show, “Signal Boost,” on SiriusXM Progress, appear on TV, write—and begin discussing her new book, which released Tuesday, July 7. She also contemplates those who don’t have the safety or security to shelter in place and how she might use this time to benefit herself and others.

The bird sings during our entire 48-minute conversation. To me, it’s a reminder of the beauty surrounding us throughout a time of pandemic, injustice and, hopefully, change. It’s a bright backdrop to our conversation about her book, identity politics and the November elections.

ZM: I love this first question. The way that I see it is this: we’ve been doing white politics. So what I mean by white politics is essentially white identity-based politics where white people — mostly white men — and their interests, needs and desires are centered in conversation and in policy. And I feel like demographic shifts require a reassessment. So the end of white politics is, as I say in the book, a statement of aspiration that we can re-evaluate and reimagine how we engage in politics, how we implement policy and who we elect to implement that policy based on the fact that our country is going to be a minority of white voters very soon. The end of white politics is basically saying we should open up the spectrum of who we are focused on when we talk about politics and when we engage in it because our demographics require that.

KJS: In the book, you talk about misconceptions surrounding millennials and Gen Z voters. You also give examples of why we must center Black women in political conversations—not make them do all the work—but to follow their lead and to listen to them. It’s so important to appeal to millennial, Gen Z and Black voters—so how do we best connect with these voters and get them to turn out in November?

ZM: So a lot of Gen Z voters will be voting for the first time, but one of the things I think we fail to recognize when we talk about young voters as a collective block is that somebody’s turning 18 every year. There is a new group of young voters and young people who we have to engage in a new way because they respond to different messaging and are on different platforms.

So with the Generation Z voters, it’s really obvious to me that they are, for lack of a better term, woke. [laughs] But in all seriousness, they understand that they have a role to play in changing the world around them and they are very strategic and smart in the tools that they utilize to do that. I like the example of the TikTok K-pop fans organizing themselves online to register for fake tickets to the president’s rally. I think that we sometimes write off young voters as being concerned with frivolous things but Generation Z is very engaged. If you grow up with that access to technology and social media, you’re just so far ahead in terms of being able to utilize that attention that we all give to our devices to engage in political conversations.

Now millennials—I’m an old millennial—they get a bad rap. I think we conflate millennials and we think of the 25-year-old or 24-year-old, but there are Millennials who are 40. So we’re talking about millennials and Generation Z—that’s people who are 40 and under—that’s a lot of people with diverse and diverging interests.

So, on the one hand you can start talking about how to make college more affordable, but on the other hand you better be talking about how to make child care more affordable because the millennials at the upper end of the age spectrum, like myself, have children and mortgages and childcare needs, and they have different policy needs than somebody who is just graduating from college.

So I think as the Democrats look towards November and try to engage both of these different groups, they need to figure out: Who is the best messenger for the message? So yes, part of that is Joe Biden, but whoever they pick as vice president is going to be critical in that.

Who can authentically engage with those voters in a way that doesn’t seem pandering? Joe Biden has to lean into this heavily because you want to utilize every tool at your disposal. You need to go into the spaces where the kids are.

So if they’re on TikTok, you better be on TikTok. … You have a presence. And it has to be ubiquitous in all of the spaces so the campaign is perceived to be trying. Because part of the problem is that they don’t try. They think that they’re trying to engage Black voters by having Democratic politicians show up at a lot of church services, but that’s not enough. You need to engage movement leaders and activists. You also need to engage young elected officials. You need to create a pipeline of young elected officials of color. You need to create a pipeline of young Black and Brown staffers so that you have people in the room that can help you not say stupid things on the campaign trail, but also help you say the right things on the campaign trail.

KJS: And part of being a digital native I think —I’m not one, but I think—is that the messaging moves so quickly. So the Biden camp or other candidates need to keep at it, every day, over and over. It’s not, “Oh, okay, I’ve got Black voters, check. Now we can move on to someone else.” It’s such a good message. Did you spend the Biden camp a copy of the book? [laughs]

ZM: I did not. [laughing]. I suppose they will read it. You know, when [Biden] had the gaffe a couple of weeks ago with Charlamagne tha God on The Breakfast Club, I went back and reread the chapter on Joe Biden and I felt very good about what I had written.

I wrote a very critical chapter on Joe Biden—but I think the critique that I make is with the purpose of improving his candidacy now so that he can become the president. My point is that some of these weaknesses are potentially fatal to his candidacy with the groups that we were talking about. You want to be able to correct the record because the record’s out there. I feel like this is when the surrogate push needs to be huge. This is when you need those movement leaders and activists out validating and vouching for Joe Biden as a trustworthy partner, leading us as a transitional figure to look to the progressive future that people are in the streets protesting for. He has said he is a transitional figure and so the chapter about him in the book is to hold him to that promise and to say: Here’s how you can be held accountable for your previous record—and you need to fix it.

KJS: Right. Well, I joke about sending a copy to the Biden camp but I do think one of the strengths of the book is that it’s so readable and accessible, and so grounded in fact and research, that anybody will be able to read this book and gain a lot from it. It’s also very pragmatic, I mean, you’re giving away the Special Sauce; this is how to do it!

ZM: Oh yeah! Within campaigns, [there were a] number of times that I would say something that I thought was super basic or make a point that I thought was the most obvious thing ever and yet it was not [obvious] to everyone else. But that demonstrated to me that I needed to be in that room and there needs to be like five other me’s in that room and an Asian American/South Asian perspective, a Latino perspective.

I think one of the things I give [Hillary Clinton] the most credit for is understanding that in order for her campaign to be good and effective, she needed to hire a lot of Black women. One of the senior advisors on the campaign, Minyon Moore, always said to us that Black women are the moral compass and the heart and you need to have them in the room. And they need to be empowered to speak too and not be scared to ruffle some feathers.

I was definitely not scared of that. [laughs] Because it could be hard but it’s important and Minyon always used to say to us, “You’re in the room and there are a lot of people that can’t be, so you have to speak up on behalf of those people.” I took that with me in there every day. I have love for my family from the campaign and I feel like Black staff is really important and crucial to success.