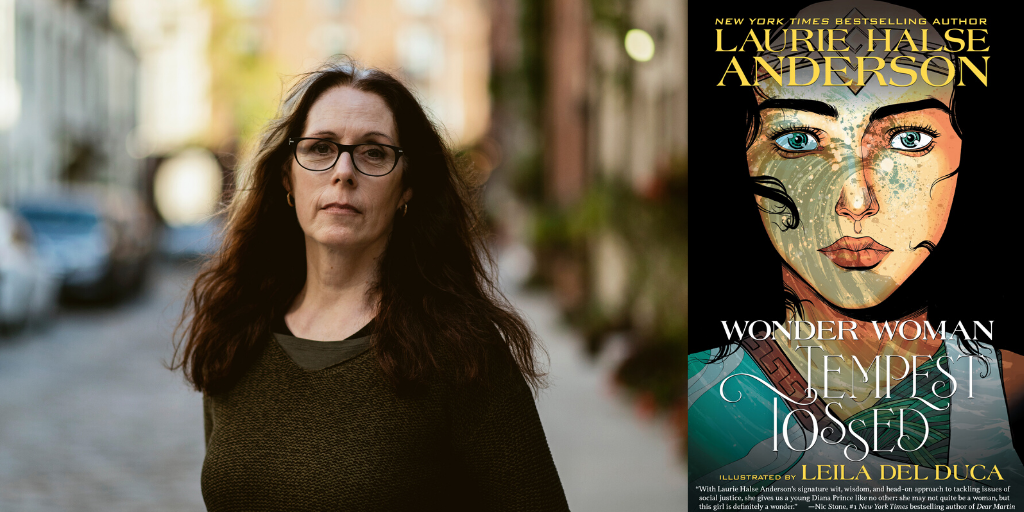 Laurie Halse Anderson is the award-winning writer of groundbreaking young adult, children’s, and historical fiction books such as Speak, SHOUT and The Seeds of America Trilogy.

For her most recent book, the New York Times bestselling author teamed up with DC Comics and an amazing group of women artists on a graphic novel telling the story of Diana of Themyscira as a teen—before becoming the iconic Wonder Woman.

Ms. spoke with Laurie Halse Anderson about the process of writing her latest book, the work of white feminism, and how she maintains creativity during COVID.

Karla J. Strand: In your new graphic novel, Wonder Woman: Tempest Tossed, you share your story of Diana before she becomes Wonder Woman. So, what is sixteen-year-old Diana like?

Laurie Halse Anderson: She’s like 16-year-olds everywhere—except that she grew up on Themyscira.

For me, her truest, most powerful strength is her need for justice. She’s got a really clear compass heading that points towards justice and fairness for everybody. We see that in her confrontation with her mother that winds up with disastrous consequences for her. And we see that once she begins to evaluate what’s going on at the refugee camp and in the United States of America.

You know, [Diana is] a very compassionate, loving person. I did not want her to have any romantic interest because she is still learning how to fall in love with herself. And then she has to learn the art of friendship. That was why I made the choice of not having Steve Trevor be somebody that she loses her heart to. We still have Steve Trevor, but it’s Steve and Trevor in my book.

I think Diana offers us a lens to look at the terrible inequities and injustices in our world and remember what we all felt like when we were growing up, when we were beginning to learn about these things. I think one of the debilitations of being an adult is you kind of settle. The power that teenagers bring to us—which is why revolutions are always led by the young—is they have the energy, but also they’re not gonna put up with the status quo if they think it’s wrong. That’s something that we all need to remember and respect them for. And so to be able to see the horror on [Diana’s] face—and can we shout-out Leila del Duca, the artist of this book?!—but that moment that Diana understands the ramifications of child trafficking, you can just see it. It just punches her in the gut; it eviscerates her. It should eviscerate everyone in every moment!

And she’s also not gonna put up with street harassment, no! She’s fighting. She reminded me what real strength is.

KJS: And how much freedom did you have to interpret that Diana story?

LHA: Working with DC Comics was amazing. It was really fun. They gave me some guidelines that were simple: She has to be 16; they wanted the story to begin on Themyscira, which I loved. Then, I had to bring her to New York. They said, don’t worry about any continuity issues because Wonder Woman’s the iconic figure and [she’s] been around in so many iterations and storylines. So, thank goodness, I didn’t have to worry about that.

But I was always very mindful; I feel so honored by the chance to contribute my book to the work of other artists and writers stretching back generations. And it was super fun! I mean, creatively, one of my favorite projects.

KJS: How did it feel to take on such an iconic character? I mean, how do you even start that process?

LHA: Well, we have to go back to 1972, which was a pivotal year for me—and Ms. Magazine. That was the year that I began to open my own eyes, began to leave childhood behind. I had a mother whose image of what a woman can and should be was very different from mine. And 1972 was a powerful year to be coming of age as a girl.

Wonder Woman gave me the model that I felt more comfortable with, gave me a model of a woman who could be a woman and be strong. She could use her intelligence and her heart and her muscles and all those special powers that we all have even if we don’t have her bracelets. So instead of being intimidated, I felt like I got to go and hang out with somebody who’s been a friend of mine for almost my entire life.