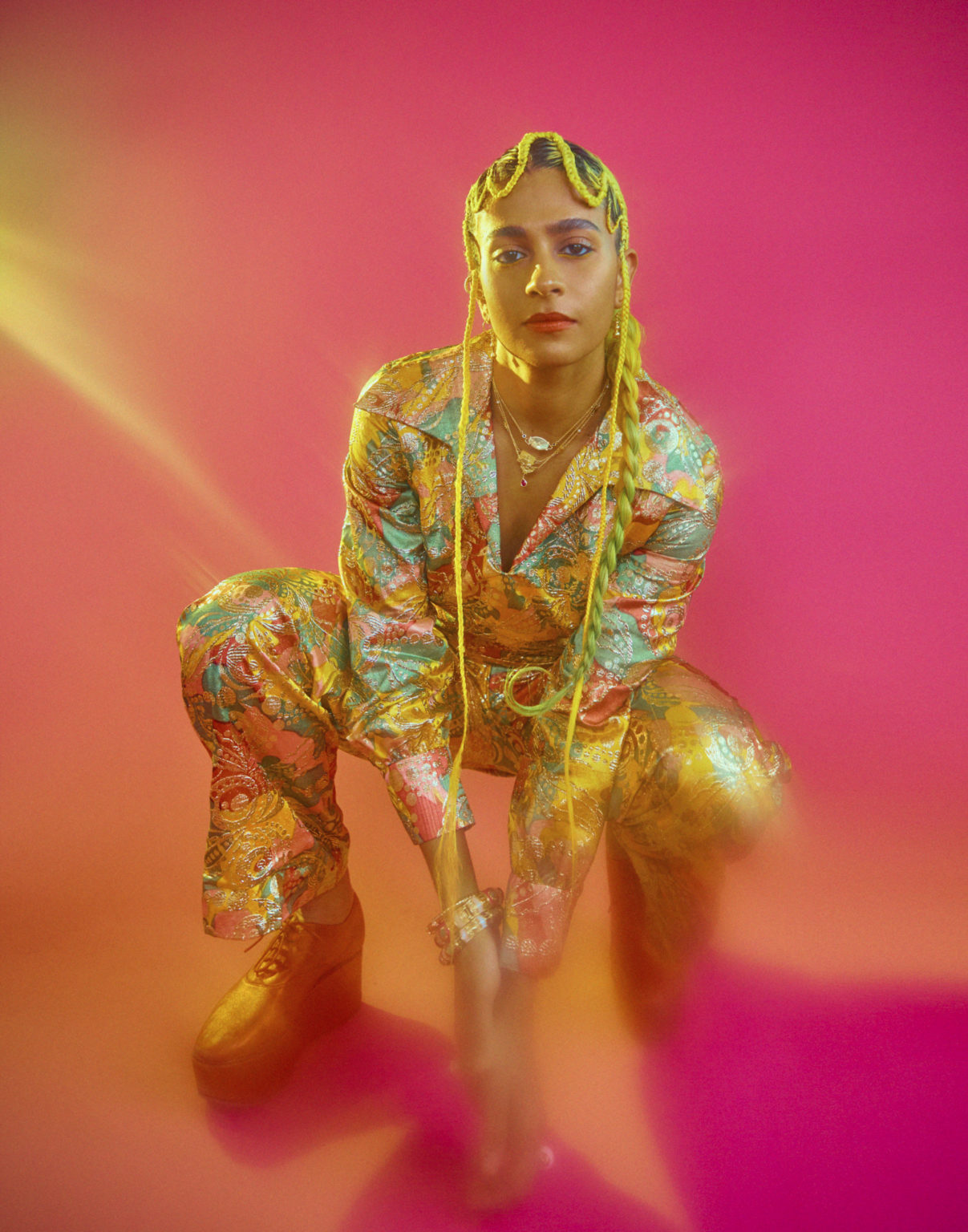 In 2015, I read an article about a woman who ran the London Marathon that April while on the first day of her period and without a tampon. That woman, Kiran Gandhi, finished the 26.2 mile race (her first) in 4 hours, 49 minutes and 11 seconds.

That was also the year that Gandhi completed her MBA at Harvard, while performing as the touring drummer with musical powerhouse M.I.A. Because how do you choose between a Harvard acceptance and a national tour? If you’re Kiran Gandhi, you don’t; you do both.

By 2019, Gandhi had released two EPs as Madame Gandhi, opened for Ani Difranco, toured with Thievery Corporation, played Bonnaroo and numerous other festivals, and been named one of Forbes’ 30 Under 30 in music for 2019.

I was lucky to talk with Madame Gandhi on the eve of DJing (for the second time) the Ms. Foundation for Women’s annual gala event, Feminist Block Party “Roar for Women“—being held virtually this year due to COVID. We talked about the pandemic, creativity, bravery, ecofeminism and more.

Karla J. Strand: Things have been pretty wild with COVID—and I’m sure for a musician, it’s been hard to not be in front of live audiences. I know that you’re doing a lot of virtual events. So, I wonder how you’ve been holding up. Do you find the virtual events as fulfilling or as inspirational? Is there as much interaction as you normally like?

Madame Gandhi: I really am craving live. I really miss connecting with people and the excitement of travel. It only makes me feel more grateful for the time that we did have 2017, ‘18, ‘19 traveling the world and being with people. It makes you really feel so excited for whenever that possibility will happen again.

In this moment, there’s two kinds of virtual experiences: one is truly live, where I’m on Instagram or Facebook, and I can see the comments coming in. And so people are watching and engaging simultaneously. Those are actually fulfilling because they’re still a connection and, in fact, the connection ends up being intimate in a different way because the folks are reacting in real time and asking questions in real time and feedbacking in real time. Whereas when you’re performing, there’s of course cheers and dancing, but someone can’t ask you, “Hey Kiran, why did you write that lyric?” Or “Hey Kiran, where did you get that shirt from?” Or “Hey Madame Gandhi, this is my favorite song of yours.” They can’t say that if I’m on a stage, so that part is unique and is special and I am digging into that. I do go live pretty much every day either for a performance or an interview with somebody. So I love that.

The second kind of virtual is when I have to do something pre-recorded and then submit it. And I really don’t see much value in that. I’m happy that I tried it out a couple times, just to be able to give [it a try], but I don’t think that that kind of content is interesting. I just don’t connect with it as much. It’s a prerecorded thing and people are just watching it and unless it’s produced really nicely, I don’t know if it delivers value to the audience.

So I think the best way to do it is truly live instead of pre-taped from an iPhone.

KJS: I appreciate virtual and I hope it sticks around actually after COVID, because I think it opens these types of events up to a whole new audience as well.

What have you found helps you stay creative and stay inspired? I think it’s been harder for some of us to stay inspired through all of this.

MG: Basically I think that there’s two main things that help my own personal creativity.

With both a mixture of time on my hands and and being truly alone in my own loft, I find myself just singing a lot more. So I think one thing for those of us who are quarantining with people, finding that time to be alone—going for a walk, singing into your iPhone—for me, that’s the best way I’ve been writing new music. It actually feels a lot easier to write in this way instead of having all the immediate stimuli that require my attention in the present.

And then the second thing I rely on for my creativity, ironically, is a routine. When I was here in the first couple of weeks, it was like a new life! I wasn’t used to being in quarantine and by myself, so to develop a routine was really good. I do the same kind of daily flow every day and that marks my evenings for time to do creative things, and I really do love that.

MG: So, the first time I met Gloria was after I ran the London marathon. And it was a meeting between me, Gloria, Jennifer Weiss-Wolf and Miki Agrawal at Gloria’s home on the upper east side of Manhattan. She’d invited the three of us over because we each were tackling menstrual health through different lenses: mine was through my music and activism, and Nikki’s was through the company that she had built called Thinx, which is period underwear, and then of course Jennifer Weiss-Wolf through policy and actually fighting to combat the tampon tax in [New York state].

Meeting Gloria was powerful because this is someone who’s been doing this work for decades and is so brilliant and leads with love and leads with kindness and leads with intelligence and she still has that energy all these years later. She still radiates with this beauty; she’s very beautiful—and I don’t mean that in a Hollywood way, I really mean it in a soul-shining way. So seeing her again and being able to DJ and watch her dance, that felt really rewarding when I did the Ms. Foundation gala [in 2017]. And I don’t know if she’ll be watching tomorrow, but I hope she does and I hope to play some songs that make her dance.