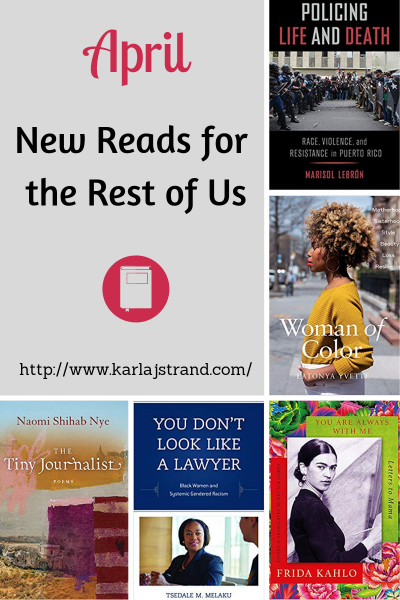 Here are your New Reads for the Rest of Us for April 2019!

Since I’ve begun a regular column over at Ms. Magazine, I’ve been posting the Reads for the Rest of Us that I am most excited about there. Reads for the Rest of Us here used to be everything I found being published by women that I could find. Over at Ms., I’ve shortened the list due to time and space limits. Well, you’ve told me that while you love the Ms. lists, you also miss my more comprehensive lists, so I have decided to reinstate them here!

They’ll be a bit different from those I used to post as I won’t be able to take as much time to describe them fully; I’ll need to leave that to my Ms. column. Instead, I’ll just compile a quick and dirty list of covers with links for you to browse! So let’s try this out for April and see how it goes! Let me know what you think in the comments below.

This post contains affiliate links. If you click on the links above and purchase an item, I receive a small commission. This in no way raises your cost for the item. Many thanks for your support.