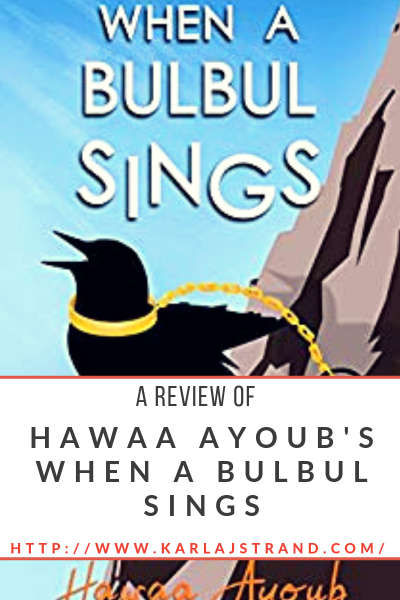 Hawaa Ayoub’s chilling debut novel centers on 14-year-old Eve who, after being taken from her home to remote Yemen under the pretense of a temporary visit, is forced into marrying a man over ten years older than her. The story is terrifying, infuriating — and that of Ayoub herself.

Eve, a schoolgirl in the UK, is extremely intelligent, has plans to attend university, and is focused on a bright future. Her father takes the family on what he said would be a brief visit to Yemen, the family’s country of origin, but the truth is that he intended for the family to stay. Worse yet, he forces Eve to marry a man much older than her.

The book opens with the terrifying marriage scene with Eve being dragged through the process, begging for it not to happen. From the start of the book, the reader experiences Ayoub’s talent for description and detail. From clothes, to traditions, to smells and sounds, the author’s descriptions of life in Yemen are — frighteningly at times — brought to life.

We follow Eve’s story throughout the next 15+ years. The circumstances she endures are heartbreaking and infuriating: rape, abuse from her father and in-laws, losing her right to education and autonomy. But while our heroine surrenders to her new (temporary) life, she never agrees to it or stops fighting for her freedom.

Throughout her entire marriage, Eve demands to be free. She asks to return to Britain, or at the very least to a more urban center of Yemen or to Saudi Arabia. She constantly schemes for ways to escape the situation and begs for a divorce, all to no avail.

While she is adept at sharing its horrors, Ayoub also provides an honest portrayal of the daily life of a young girl forced to marry. She describes the isolation, the boredom, the repetition of her days, and the relationships with her husband’s family. The conflict and guilt Eve feels as a young woman who enjoys sex but despises the situation she’s been forced into is described as only one who has been there can. While a bit protracted at times, I appreciated these candid reflections. Ayoub is particularly skilled at providing her readers insights into the dichotomies of Yemen: experiencing a beautiful land surrounded by strong traditions and people but all the while being held prisoner there where the traditions are particularly vicious towards women and girls.

According to the organization Girls Not Brides, child marriage is a global issue that effects 12 million girls each year; nearly 23 girls every minute are forced to marry before the age of 18. Child marriage occurs in many countries throughout the Middle East, Africa, South America, and the United States. A young girl forced to marry experiences many injurious effects, especially to her education, her family life, as well as her physical and mental health. Hawaa Ayoub was one of those girls and, thankfully, she was able to get out.

After 19 years in Yemen, Hawaa Ayoub now lives in London and shares her story to help fight against child marriage in Yemen and throughout the world.

Rich and descriptive, When a Bulbul Sings is an important book that candidly describes one girl’s harrowing experiences being forced into marriage and her seemingly unending drive for freedom. The book is well-written and well-edited. I highly recommend it to those fighting violence against women and girls, those who enjoy reading international women writers, and those interested in creative non-fiction and memoirs.

You can find Hawaa Ayoub online at https://hawaaayoub.com/ and on Twitter @HawaaAyoub.

2 Paths for Yemen’s War-Scarred Children: Combat, or Marriage by Nour Youssef for The NY Times (October 8, 2017)

After Years of Civil War, Child Marriage Is on the Rise in Yemen by Sarah Ferguson for Unicef (December 2017)

The harrowing story of 14yr old destined for Oxford – before being forced into marriage by Mike Lockley for Birmingham Live (July 15, 2018)

Many thanks to Hawaa Ayoub for the complimentary copy of When a Bulbul Sings; I write what I like. This post contains affiliate links.