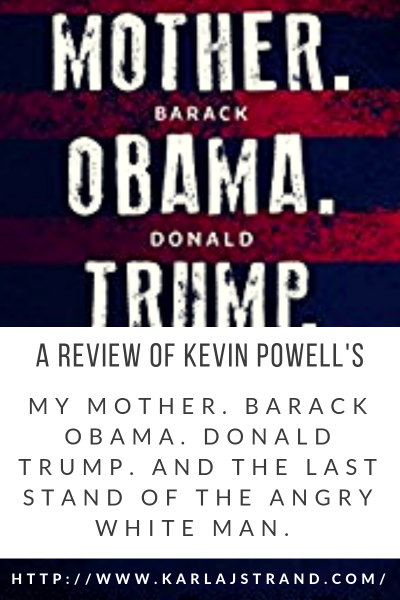 This year I have committed to reading and reviewing books mainly by womxn writers but when I received an advanced proof of Kevin Powell’s latest book, My Mother. Barack Obama. Donald Trump. And the Last Stand of the Angry White Man., I decided to make an exception.

Despite Kevin Powell having authored 12 previous books, this is the first one of his I am reading. I initially encountered Powell during his time on The Real World in the 90s and kept loose tabs on his writing career since. I have enjoyed some of his essays in Vibe and other outlets throughout the years so was excited to read this new book.

The book is a collection of 13 of Powell’s articles and blog posts from the last couple of years. The essays are cogent reminders and reflections of events from pop culture to politics, from Tupac and Prince, to gender and masculinity, to mental health and police brutality, all through the eyes of Kevin Powell.

And Powell doesn’t let us forget who he is: born and raised by a single mom in impoverished Jersey City, no father figure, university dropout, drunk, suicidal, and burnt out by 30 and against all odds now a sober and accomplished writer, committed activist, and desired speaker who has visited all 50 states and 5 of 7 continents. While overcoming the barriers he has is impressive, if there’s any part of Powell’s writing that loses me, it is this slip into self-indulgence that sometimes occurs; Powell has a way of inserting himself and his experiences into almost any subject he writes about.

Part of this, I believe, is just his writing style; people write about things they know and things that resonate with them. It may also be that Powell is still working through past transgressions – his own and others’ – and this is his way of making sense and making amends. Because these essays were originally published as stand-alone pieces, it is understandable that he would provide context in each one.

In the end, I found this quirk of Powell’s to be a minor distraction against the overall strength and passion of this writing. In fact, there are times when the confessional style really works, such as in “JAY-Z and the Remaking of His Manhood. Or, the Crumpled and Forgotten Freedom Papers of Mr. Shawn Carter,” where Powell strives to understand manhood and gender-based violence through the relationships of his mother and father, Beyoncé and JAY, and John Lennon and Yoko Ono.

On the whole, I really dig Kevin Powell’s writing and certain elements really resonate with me. One is the variety of styles with which he is willing to experiment, be it a conversational blog style as in “Why is Baltimore Burning?,” a letter format as in “Letter to a Young Man” and “A Letter to Tupac Shakur,” or an impassioned essay like his “Will Racism Ever End? Will I Ever Stop Being a Ni**er?”

I appreciate the repetition, timing, and poetic phrasing in his work which is reminiscent of the cadence of his heroes Malcolm X or Muhammad Ali, or of the musical qualities of Black preachers I heard one chilly Sunday morning in Alabama. I covet the pure and unabashed passion with which Kevin Powell writes. He’s not afraid to show his sensitivity which gives me hope for the future of (cishet men’s) writing. I also appreciate Powell’s ability to write broadly and deeply about a subject, taking his time to display his detailed and thorough understanding, while still making it accessible to the general public.

There is usually a lot of meat to what Powell writes. He ties personal experiences in with his subjects; he refers to other events, current and historical, and he weaves in music, art, politics, and more so that his pieces can feel like experiences. The essay, “Hamilton, OJ Simpson, Orlando, Gun Violence, and What the 4th of July, Alton Sterling, Philando Castile, and the Dallas and Baton Rouge Police Shootings Mean to Me,” is so much more than a summary of his experience attending the play Hamilton on Broadway and what it meant to him. And there is a paragraph (pages 146-147 in the advanced proof copy) in his piece about JAY-Z’s album 4:44 that is the epitome of how I wish I could pen a review. Powell not only entices you to understand where he is coming from on a topic, but he challenges you to critically reflect on where you stand on it and why.

It probably won’t be surprising that one of the essays I most enjoyed is entitled, “Re-defining Manhood: Harvey Weinstein and How his Toxic Manhood is our Toxic Manhood, too.” In this piece, Powell takes responsibility for his own transgressions – that time he pushed a former girlfriend into a bathroom door – and explains how male privilege takes hold of boys early on and subsequently develops into ubiquitous notions of toxic manhood as they grow up. He discusses the #MeToo movement and how actions of men like Harvey Weinstein, men like Kevin Powell, and all men, can harm and wound women in ways that must end and can only end when men take action to help support women and fight against sexual violence and harassment.

Throughout the book, Powell doesn’t shy away from the exploration of his own manhood and calls on others to do the same.

Until the final essay of the book, Powell mentions the current president of the US only briefly in several of the essays, despite his name being included in the book title. I found this essay, after which the book is named, one of the most intriguing. He begins with an honest yet delicate reflection on his mother, his absent father, how the two fell in love, and how the history of violence and mistreatment of Blacks in the US has shaped the present. He goes on to explore politics and the presidency of Barack Obama as well as how this systemic oppression makes change infuriatingly slow in this country. All of this led to the election of current administration which, while a tragedy, is by no means a surprise to black and brown people of the US.

Because this is not really about the American people, this is really about a system that is built to protect a few at the expense of the rest of us (page 266).

Now it is incumbent upon all of us to work towards permanent change which, according to Powell, won’t come without people being as outraged by injustices done to others as they are when they are done to themselves. It won’t come until we begin to follow the leadership of Black women and women of color; it won’t come until White women admit to and challenge our own racial and class privilege; it won’t come until we all rethink how we view and treat women, people of color, poor people, LGBTQ people. This essay is the best example of why Powell calls this book “the autobiography of America” (page 261).

Kevin Powell’s latest book is a collection of reflective and impassioned essays from a veteran observer and chronicler of music, politics, race, gender, and current events. It will appeal to wide audiences and may be most enjoyably read in multiple sittings so the reader can digest and reflect upon each piece. Individual readings could readily be assigned in special topics or intro courses covering race, and other sociocultural issues, politics, and gender and women’s studies. This book is recommended.

You can find Kevin Powell online at http://www.kevinpowell.net/ and on Twitter @kevin_powell.

Kevin Powell on Growing Up in Poverty

Kevin Powell’s Memoir Will Crush You by Dave Zirin for The Nation – Sept 30, 2015

Hip-Hop Historian Kevin Powell Reflects on Relationship With Tupac Shakur, 20 Years After His Death by Andres Tardio for Billboard – Sept 13, 2016

Quotes refer to the Advance Uncorrected Proof and may or may not reflect the final version of the book. Many thanks to Kevin Powell and Atria Books for the ARC.

20 thoughts on “A Review of Kevin Powell’s MY MOTHER. BARACK OBAMA. DONALD TRUMP. AND THE LAST STAND OF THE ANGRY WHITE MAN.”