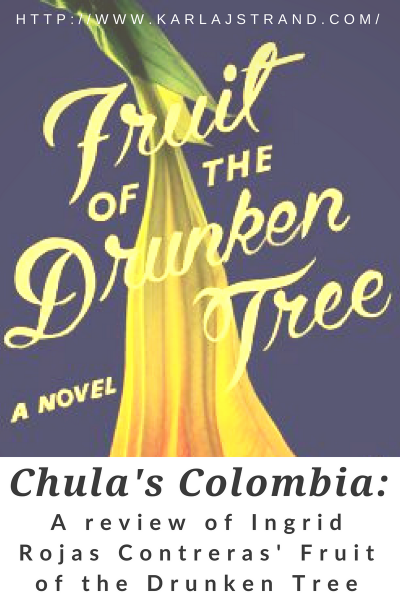 Ingrid Rojas Contreras was born and raised in Bogotá, Colombia, and this is where her remarkable debut novel, Fruit of the Drunken Tree, takes place.

In a time when Pablo Escobar, infamous drug lord and head of one of the most dangerous criminal families in the world, was at the height of his power, seven year old Chula and her family enjoy relatively safe lives. That is until Chula’s curiosities about their new maid, Petrona, get the better of her. Petrona and Chula develop an unlikely and heartfelt friendship despite their differences.

Chula lives with her sister and parents who enjoy carefree lives, aside from Chula’s father often traveling for work. But Petrona goes home to a very different world when she leaves the safety of working for Chula’s family. Petrona and her family live in a poor, guerrilla-held area of the city which is unprotected from the car bombs and kidnappings which occur more frequently as the story progresses.

“I knew that there was no gate surrounding the invasiones where Petrona lived, no iron locks on the doors, no iron bars on the windows. When I asked Petrona how she and her family stayed safe, she laughed. Then because I was embarrassed she shrugged her shoulders. She thought for a moment then said, ‘There’s nothing to lose.’ Five syllables.”

The differences between the lives of Petrona and Chula are stark; Petrona’s life is a mystery that Chula feels driven to uncover, despite the dangers. Their relationship is illustrative of the real challenges that inequalities in class and socioeconomic status can often pose.

When I began reading this book, it was these differences in the main characters and their situations that most interested me. I knew there was more lurking just underneath the surface. I appreciated that Fruit of the Drunken Tree had me questioning: What makes a family? What can friendships overcome? What would I sacrifice for others? For safety? For love?

As I read further, the layers of the book had me reflecting on the toll violence plays in societies in general, but especially on women and girls. Women are often forced to make impossible choices in times of war and violence; girls, in turn, carry incredible burdens of fear and responsibility much bigger than themselves.

“Cassandra was biting her nails. She said she could outsmart the guerrillas if they ever tried to kidnap her. She was, after all, first in her class… ‘My history teacher says most guerrilleros haven’t gone past the fourth grade, and I’m in fifth.’

My eyes widened as I turned to look out the window. I was in third.”

I didn’t know much about Colombia or Pablo Escobar before reading the book. It is not necessary for the reader to have this background but the book did pique my interest in learning more about Colombia’s history, language, and culture. [Of course I did some research and have included some links below.]

Essentially, during the time the story takes place, violent conflict in Colombia had already been raging for decades. Right-wing paramilitaries began fighting against the existing left-wing revolutionary rebels; the drug trade and cartels, like the one led by Pablo Escobar, added another layer to an already deadly situation. Despite the seemingly safe existence that many middle- and upper-class Colombians lived at the time, the fighting was never far from the minds or realities of many.

“My Barbie, Lola, had been the boss of guerrillas in Putumayo, but her men revolted against her and chopped her up and left her for dead in a jungle. She had a red bandana around her forehead and penciled-in bags under her eyes.”

It is so compelling to me that Escobar, like many other larger-than-life men throughout history, was hated by some but still loved by others, even considered a Robin Hood-style savior. He was a magnetic yet terrifying figure who evaded capture for many years.

Around this time, I also came across a new television show, Dark Tourist, in which the host traveled to Colombia to explore Escobar tourist attractions there, of which there are many. In one segment, with one of Escobar’s closest henchmen, the host goes on a tour of La Catedral, the prison at which Escobar was held for a year – that Escobar himself built (!).

It may be shocking for some to think that anyone would want to tour this site but it illustrates people’s fascination with charismatic, narcissistic, and often, evil figures. Rojas Contreras is especially skilled in portraying this dynamic and other seemingly incongruous facets of life and relationships.

This becomes more impressive when you learn that this book is based on experiences of Rojas Contreras’ life and people she knew. How she is able to take her own experiences of being a girl growing up in Colombia and construct a powerful story with such universal meaning is a true testament to her skill as a writer.

So what is a Drunken Tree and how does it tie in to this story? Well the Drunken Tree, called Borrachero in Colombia, is a tree with beautiful flowers and fruit that hang down from its branches. It has a sweet smell but is deadly poisonous. For years, the fruit has been ground into a drug that causes extreme confusion, a dangerous lack of judgement, and according to Rojas Contreras, “…it takes your free will away.”

In the book, one of these trees stands in the backyard of Chula’s home and her mother warns her about spending too much time too close to it. The tree is a symbol of how sometimes the most beautiful things can be the most haunting and dangerous; it encourages the reader to reflect upon friendships, intentions, and trust.

Bottom line: Ingrid Rojas Contreras is just a fantastic storyteller. Her characters and the plot are fully and meticulously developed while the perspectives of the story switch seamlessly between Chula and Petrona. I felt invested in the characters, their lives, and their survival. This is one of Rojas Contreras’ true strengths.

The result is a full, rich tapestry of authentic interactions and emotions both among the characters and with their reader. Fruit of the Drunken Tree is an outstanding debut; if you appreciate raw yet flavorful storytelling, robust storylines, or Latinx literature, I highly recommend it.

This post contains affiliate links; quotes are based on the advanced reader’s copy (ARC) and may or may not be reflected in the final copy of the book. Thanks to NetGalley, Doubleday, and Ingrid Rojas Contreras for the complimentary ARC! My reviews contain my own honest feedback.

18 thoughts on “Chula’s Colombia: A Review of Ingrid Rojas Contreras’ FRUIT OF THE DRUNKEN TREE”