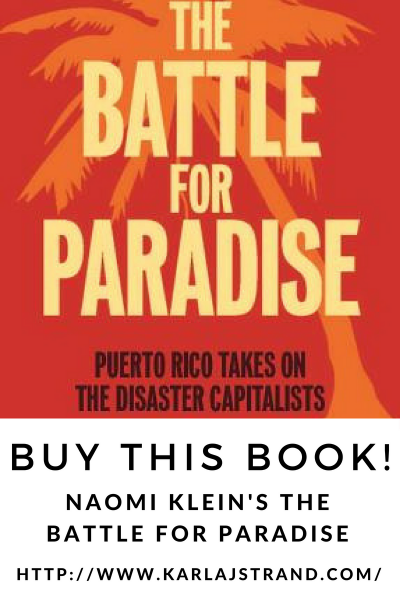 And despite Puerto Rico’s status as a territory of the United States, the US government has done embarrassingly little to assist the American citizens of this beautiful island.

While the absence of US assistance has been bad enough, there is a more malicious contingent at work. Naomi Klein takes aim at them – disaster capitalists – in her new book, The Battle for Paradise: Puerto Rico Takes on the Disaster Capitalists. In it, Klein makes a strong argument for fighting against selfish outside influences trying to make a buck on the backs of traumatized local Puerto Rican communities.

Does this situation sound familiar? It should because it is essentially another colonization of Puerto Rico by the US.

In this 96-page book, Naomi Klein gives her reader a short history lesson as well as reasons why Puerto Ricans would (and should!) be skeptical of outside actors (pp. 25-32). While lifelong Puerto Rican residents dig out from under the wreck of Maria, the governor and other self-interested players court the rich from the mainland US by offering major tax breaks to move there – tax breaks that residents do not get to take advantage of (pp. 18-19).

Often referred to as “Puertopians,” these wealthy libertarians seek to live tax- (and care-) free in Puerto Rico, all the while seeing themselves as saviors of the embattled island and its residents (pp. 15-25). As Klein explains, “In February 2018, [the governor of Puerto Rico] told a business audience in New York that Maria had created a ‘blank canvas’ on which investors could paint their very own dream world” (p. 25); never mind the over three million people who already call it home.

Klein explains how Puerto Rico was in such a vulnerable position, even before Hurricane Maria hit, with importing a staggering amount of fossil fuels (pp. 5-7) and food (pp. 32-37) while also incurring an enormous debt after the global economic downturn of 2008 (47-51). These deficiencies are in large part due to the legacy of colonialism and the plantation economy.

In addition, situations and events in Puerto Rico over the last twelve years have made it particularly vulnerable to “shock doctrine” tactics. According to Klein, the phenomenon of the shock doctrine is the “deliberate exploitation of states of emergency to push through a radical pro-corporate agenda” (p. 45). Klein lays out how Puerto Rico is the most distinct example of this since Katrina hit New Orleans in 2005 (pp. 43-53).

But Klein is also intentional in giving inspirational examples of how some local residents are harnessing collaborative partnerships, renewable energies (pp. 8-11), and innovative agricultural practices (pp. 37-43) to challenge existing inequities, untenable structures, and malignant outside influences.

It is this entrepreneurial spirit that Klein encourages in Puerto Rico as this is an opportunity for them to transform their home into the sustainable paradise that they themselves envision (p. 12). Through organization and strength, they will be able to overcome the “Puertopians” who seek to resettle the island (pp. 30-32).

While Klein’s book explores only one facet of the effects of Maria on Puerto Rico – disaster capitalists setting their sights on Puerto Rico in its vulnerable post-Maria state – it is an imperative issue to address. Only a brief (although necessary) introduction, the book offers a firm foundation to understanding disaster capitalism, the shock doctrine phenomenon, and how Puerto Rico was susceptible to more than just hurricane damage when Maria struck.

This is a quick and worthwhile read for anyone interested in Puerto Rico, the effects of colonialism and/or natural disasters, or the empowerment of local Puerto Ricans to lead the efforts of rebuilding how they see fit. It’s accessible information to most anyone, even those with no knowledge on any of these topics or the history of Puerto Rico.

For more information on Hurricane Maria, its effects on womxn, and the role womxn are playing in rebuilding Puerto Rico, please see this Women in Puerto Rico Resource Guide that I’ve created.

An aside: as a librarian, I advocate for borrowing books as much as possible. But this time, I am making an exception and asking you to purchase this book from the publisher, Haymarket Books, as all the proceeds go to JunteGente, a group of Puerto Rican organizations “resisting disaster capitalism and advancing a fair and healthy recovery for their island” (p. vi). Also, it is an accessible analysis of this timely and invaluable topic, so you should probably just buy a copy if possible. [Links to purchase are below.]

Naomi Klein can be found online at http://www.naomiklein.org/main and on Twitter @NaomiAKlein.

Have you been following the situation in Puerto Rico? Have you been to the island? Have you read this book or plan to? I would love to hear your thoughts.

I received this book as part of my subscription to the Haymarket Book Club. This post does NOT contain affiliate links because I want you to purchase it from Haymarket for the benefit of JunteGente! Thank you!

16 thoughts on “Buy This Book! Naomi Klein’s The Battle for Paradise: Puerto Rico Takes on the Disaster Capitalists”